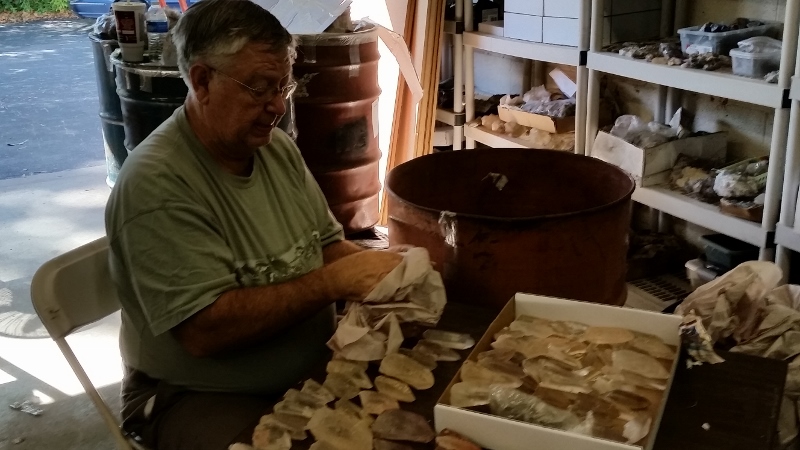 Since opening in 2003, TJ’s Rocks & Gemcrafts in Downingtown has become the place to go for crystals. (Update: Tom passed away Jan 31, 2021 but the business continues with his wife Sherry)

From Tom:  So how did I get started in the rock business?  I was about 8 years old and living in Buffalo, New York when my Dad and his friend decided they wanted to look for uranium in the Adirondack mountains in upstate New York.  During the exploration for uranium it was necessary to blast the mountain to see what was under the ground. After the blast I would run up and look for any crystals that were uncovered from the blast. It was amazing how beautiful the crystals were when they first came out of the ground; I was hooked!

Some of the crystals we found were; 24 sided garnet balls, gem quality, black schoal tourmaline, watermelon tourmaline, rose quartz, smoky quartz and many other types of minerals.  As the years passed by, my father eventually opened a mineral store in Upper Darby for a few years but then decided he wanted to “retire” down by the shore in Ocean City, NJ.  He had his store in Ocean City until he passed away in 1981.  During those years I would assist him in buying minerals and work in the store to help him.  In 1974 I was lucky to find my life’s partner (my wife Sherry) and we started out doing a little rock business ourselves.  Our first attempt in selling minerals was at Phil’s Flea Market in West Chester.  Our older son was less than a year old and he would go with us to the shows and play in his playpen while we talked with everyone.

Also in 1974 I was fortunate to start my career as a polymer chemist at Rohm and Haas company.  I was with Rohm and Haas for 30 years, retiring in 2003.  At this time I knew I could not just sit around, so I opened up a small retail shop at Simply Storage in Downingtown.  After 5 years we had the opportunity to move to our present address in a full time store operation and the doors opened up September, 2008.  We have been blessed that the community has frequented our store and we have seen increased growth each year we have been here; for that I thank everyone.

TJ’s Rocks and Gemcrafts
4.8
Based on 56 reviews

Vincent “License Guy” DiAngelus
19:04 28 Nov 20
Amazing place with a huge selection. Great local place with tons of knowledge. Visit g here was like a mini gem show... with all the trimmings.I appreciated talking with the owner and learning about the craft...they even took the time to dig into the back room to find more of what we were looking for.I will be back again and again. Thank you.read more

Jeff D
19:05 21 Nov 20
First time in a store like this. The staff was friendly and knowledgeable, and they have a big selection considering... the size of the store. It's a bit cramped but they are just making full use of the shop's small footprint. I appreciated that they didn't embarrass me further when I dropped something and made a loud noise. I was also pleased to hear they had Palo Santo wood, which I wasn't expecting!read more

John Zwirzina
14:42 03 Oct 20
Friendly and knowledgeable staff...you have to check this great store out.

J H
04:30 20 Mar 20
What an adorable shop, great collection! I love looking at all the crystals they have, although they are much more... expensive compared to the other rock shops I've been to in PA so far. Still a great place!read more

nicole hill
16:15 05 Feb 20
My favorite place to buy crystals in my area...i love the feel of it because it's down to earth and in touch with what... they're selling...rocks...it feels like my crystals actually came from the earth and not a factory...the staff is great...they let you wander and answer questions when asked but really let you do your thing...i always recommend them and I love when I can get some time to just browse...i always find something...and their prices are reasonable...sometimes too reasonable because I end up spending much more 😂😂😂read more

solstice harris
14:46 11 Aug 19
Very great environment. Some really cool crystals for great prices. I have gotten stttuf from the owner at previous gem... shows he has been a vendor at and I always get great prices for the Crystals I wanna get.read more

Heidi Reininger
02:06 18 Nov 18
TJ’s is my favorite crystal store! They have a huge selection of crystals, rocks, fossils and more. Everyone is very... friendly and always willing to help you find whatever you’re looking for. Depending on the quantity or price of your purchase, you usually receive a discount.read more
Next Reviews